Do you consider yourself an archaeology enthusiast? Are you looking for a one-of-a-kind adventure in the most beautiful of places? If so, then the archaeological site of Alyki Thassos is just the place for you! Nestled in Southeastern Thassos sits this town full of ancient ruins and breathtaking scenery. From its stunning sunsets to mesmerising temples and giant walled complexes from bygone eras, Alyki Thassos takes history buffs on a journey through time with each visit – every step uncovering something new and more exciting than before.

Alyki Thassos is an archaeological site located on Thassos in the northern Aegean Sea. It is situated in the southeast of Thassos, 32 kilometres from Limenas. Alykes, a peninsula of archaeological significance, is home to an old marble quarry.

The marble quarry was in use from the ancient to the Byzantine eras. Under the sea’s surface, large marble rocks can be seen. According to legend, the kingdom of Alyki had a sizable population and a significant harbour during antiquity. The ancient dorp is also quite interesting from an archaeological standpoint.

The original shrine was abandoned during the Byzantine era, and Christian worship moved to a hill behind the mines. Two basilicas were constructed in the region where a Necropolis stood in the late Roman era. The basilicas have three aisles, which are divided by Ionian columns and embellished with carvings of peacocks, birds, and other animals. They may have been constructed in the middle of the 5th century and were destroyed at the start of the 7th century. This was the same time the pits and the workmen’s village were also abandoned.

The ruins of two palaeo-Christian basilicas from the fifth century, which served as gathering places for worshippers up until the pre-Christian era, may be seen at the highest point. Because they were travelling to the island to transport marble, many sailors had become frequent visitors to the sanctuary. The names of their loved ones, as well as their own, were inscribed by the sailors on the stepping stones. A temple in honour of the deity Apollo was built on the eastern coast in the seventh century BC. A well-preserved Kouros was found in 1896 and has been on display in the Istanbul museum. 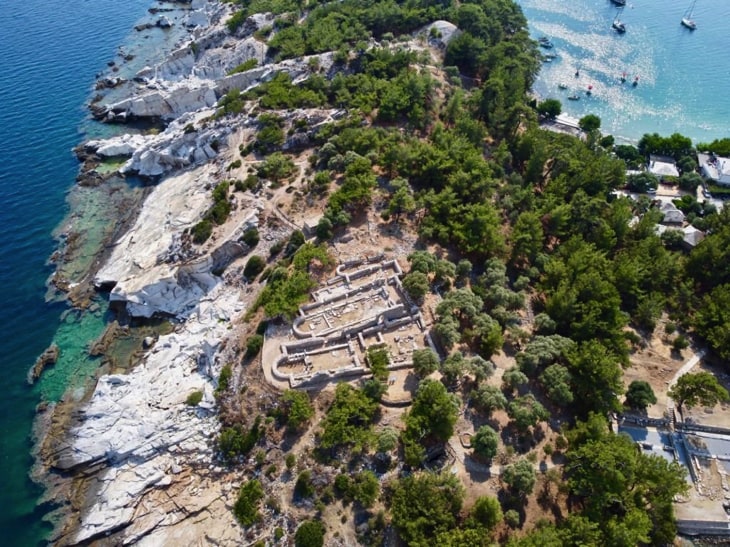 The sanctuary is divided into two buildings, each measuring 30 x 15 metres. The south building, which is next to the hill and is beautifully preserved, has a ground plan that is nearly square (12 x 13 metres approximately) with Dorian pillars in front of it. There are two unequal rooms inside the structure, the largest of which contains a low hearth for the sacrifice that is encircled by marble stones. The oldest Dorian structure on the island is thought to be this structure, which dates back to roughly 500 BC. The north building, which is nearly square (15 x 16.5 metres) and also features a hearth, is less well-preserved but otherwise has a similar layout to the previous one.

The Alyki Archaeological Site on the island of Thassos has been the subject of archaeological excavations for many years. These excavations have allowed researchers to get a glimpse into ancient Greek life by uncovering a variety of artefacts and structures, such as a temple, theatre and residential buildings. Thanks to these discoveries, we are able to gain valuable insights into the history and culture of this era. In particular, the importance of religion and public gatherings can clearly be seen in the structure of the temple, and the theatre found at the site.

The work at Alyki Archaeological Site is conducted with utmost care and precision. A collaboration of archaeologists, experts, and the latest technology come together to carefully uncover countless amounts of ancient history. Geophysical survey equipment such as ground-penetrating radar is often employed to detect buried structures under the soil. The excavation process involves the use of hand tools like trowels and shovels to delicately lift away layers of dirt and debris that may have built up over time. To gain a deeper knowledge about the artefacts discovered, researchers use laboratory equipment like microscopes and spectrometers for further analysis.

The guidelines and protocols that govern excavations at the site are carefully crafted to ensure that the artefacts, features, and structures uncovered during excavation can be accurately studied and interpreted. This data is keenly documented in order to build a larger picture of ancient cultures and civilisations, which can then be shared with our communities through exhibitions, publications, lectures, conferences, workshops, or other outlets. Proper excavations at archaeological sites such as Alyki give us a much deeper insight into our pasts in ways that allow us to maintain a sense of pride in our collective heritage.

All in all, Alyki is an astonishing archaeological site which gives us unique access to understanding one of Greece’s most cherished eras.

Archaeological excavations at the site have revealed a variety of artefacts, including pottery, tools, jewellery, and coins. The remnants of the quarry are half buried in the water on the peninsula’s tip. Numerous abandoned, partially completed marble statues, columns, and enormous blocks can be seen in the quarry and the shallow water at the location, providing proof of the ancient mining’s existence. You can still see the remains of hundreds of guard towers that were built along the quarry’s perimeter in order to keep slave labourers there as well as to keep thieves and pirates away from the workers and the marble.

Alyki Archaeological Site holds a wealth of information about the history and culture of ancient Greece, making its preservation essential. By safeguarding this treasure trove of knowledge, we are able to learn more about how people lived during that period and can appreciate their cultural heritage. Additionally, by ensuring the safety of Alyki, future generations will be able to benefit from the site and understand its importance for posterity. Protecting such an important archaeological site is a key part of preserving our collective past, allowing us to better understand humanity’s origin stories. 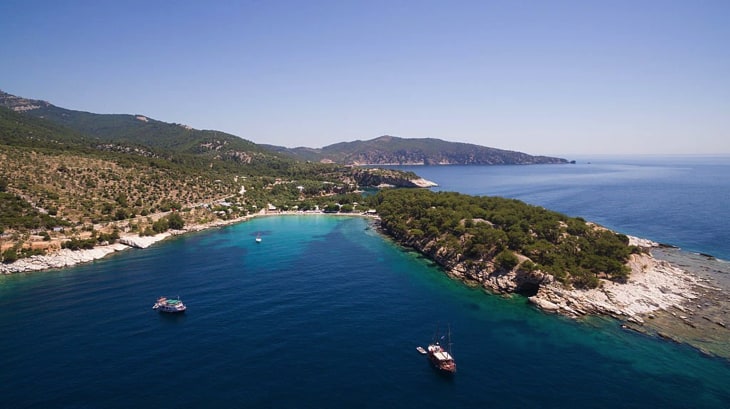 This is why the site is subject to a number of preservation measures in order to protect its many wonders from degradation. This includes regular maintenance and protection from natural elements, as well as efforts designed to deter any looting or vandalism that might otherwise occur. The site also has exclusive teams of archaeologists and other experts monitoring and managing the area with great care so that its impressive artefacts, architecture, and monuments may continually remain in pristine condition for all generations to come. Some of these ancient sites are even open for public viewing in order for visitors to learn about and appreciate Thassos’ expansive and diverse history and culture.

The opening of the Alyki Archaeological Site to the public has had a positive economic impact on the local community, as evidenced by the creation of jobs related to tourism and the operation of businesses that serve tourists. Yet there are other benefits associated with the preservation and protection of this ancient site — such as cultural tourism, educational opportunities, and promotion of local pride in its historical significance. This can create a sense of connection between visitors and locals, allowing them to share in this unique experience together.

The Alyki Archaeological Site possesses both cultural and economic significance. As such, it is essential to understand the potential impacts that it may have on its immediate surroundings. Managing this complex site requires an in-depth consideration of the range of factors at play – from the community engagement with the site to how its resources are shared with locals or even the socio-economic circumstances where it is located. Reflections on these matters will provide a better understanding of the long-term implications that this important landmark has on the local economy and society. Ultimately, effective management strategies will require up-to-date knowledge about the many factors at play and their overall influence when dealing with this archaeological wonder.

If you’re interested in ancient history, the Archaeological Museum of Thassos is a must-see. Located in the capital city of Limenas, this museum houses a collection of artefacts from the island’s rich past, including pottery, sculptures, and inscriptions. Another museum that’s worth visiting is the Folklore Museum of Thassos, which is located in the village of Theologos. This museum showcases the island’s traditional culture, including its folk art, costumes, and everyday objects used by the island’s inhabitants in the past. It’s a great way to learn about Thassos’s cultural heritage and get a glimpse into the lives of its people. If you’re interested in more recent history, the War Museum of Thassos is also worth a visit. Located in Limenas, this museum displays weapons, uniforms, and other artefacts from World War II, when Thassos played a significant role in the resistance movement against the occupation of the Axis powers. Overall, Thassos is a great destination for history enthusiasts, with a range of museums that offer a glimpse into the island’s past. Whether you’re interested in ancient history, traditional culture, or more recent events, there’s something for everyone to discover.