Celebrations in Thassos: The Greek festivals, known as „panigiri“ in Greek are definitely something not to miss during your holidays on Thassos!

But what happens at these festivals and why are they so popular among Greek people and our guests? Keep reading to find out!

Celebrations in Thassos – What is a “panigiri”

Well, a panigiri is a centuries old traditional festival organized during the summer months mainly in small Greek villages. They are religious ceremonies and social gatherings rolled into one! Religious because of the saint’s day being celebrated and the village is named after that saint, or the village has a church dedicated to the saint. Social because of the gathering of all residents of the village, everyone is welcome!

Celebrations in Thassos – What happens in a “panigiri” 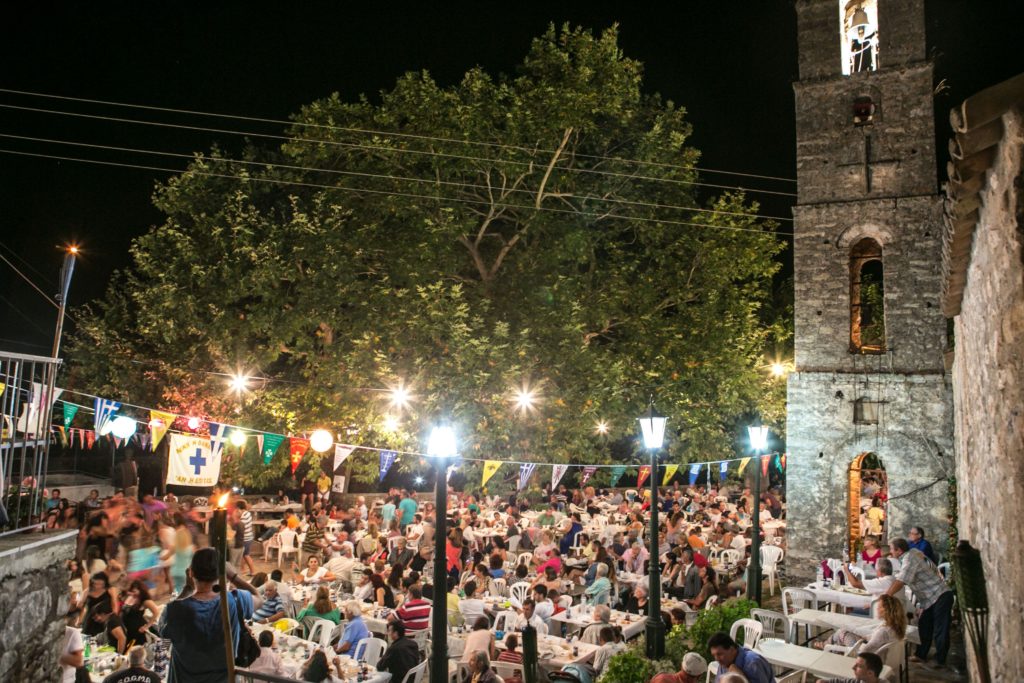 At a panigiri you will meet people, from small children to retirees and of course the village priest! In most of the cases, a ceremony/dedication takes place in the church in the morning or afternoon, then the “party” starts and goes on until the last person is left standing!

The locations vary from village to village, from village squares, church courtyards and sometimes in a field! How to find the location? Just follow the music or the delicious smells from the many traditional dishes being cooked up!

And here comes the best part! In the evening, the celebration of the Saint continues with authentic Greek food and plenty of local Greek wine and ouzo all accompanied by live traditional Greek music!

After a bit of wine and food, locals and guests dance and sing traditional island music till early in the morning.

Apart from the food and the wine you will find small stalls selling locally produced honey, olives, olive oil, souvenirs and other traditional products.

Did we persuade you to experience a traditional panigiri during your holidays on Thassos?

Check out some of the dates and places for this summer on Thassos, don’t miss it! There are also other festivals without religious connections, for example food and wine tastings, look around for posters advertising these or ask someone!

The memory of Saint Panteleimon is celebrated in Mikro Kazaviti by the transfer of his icon from the Chapel of St. John the Baptist to St. Panteleimonas. As a bonus the traditional Greek dance group „Mikro Kazaviti“ also puts on a performance during the evening.

The transfiguration of Jesus Christ is celebrated in Sotiros.

Celebration and feast in memory of Saint John, at the little church of St. John on the mountain above the village of Prinos.

Hire a car from Potos Car Rentals and experience the Thassian celebrations!