If you plan to visit Thassos, knowing when the best time to do so is essential. It not only allows you to avoid the crowds, but also ensure that you have the best possible weather for your holiday. Each of us has different preferences when it comes to weather, so finding out what the average temperatures and rainfall are for each month is a great place to start.

Below, you’ll find everything you need to know about the best time to visit Thassos, including average monthly temperatures, weather and even tips when visiting during a certain season.

Summer is considered to be the peak season in Thassos since many locals and tourists flock to the island to enjoy its beaches. During summer, the island is bustling with activity. Cars cause traffic jams or delays on major roads, bars and restaurants are frequently packed and beaches are crowded.

There is a good reason why people visit Thassos during summer. The weather is perfect for swimming, sunbathing and enjoying the outdoors.

If you don’t want to deal with the hassle of large crowds, then it’s best to visit Thassos during the shoulder season. 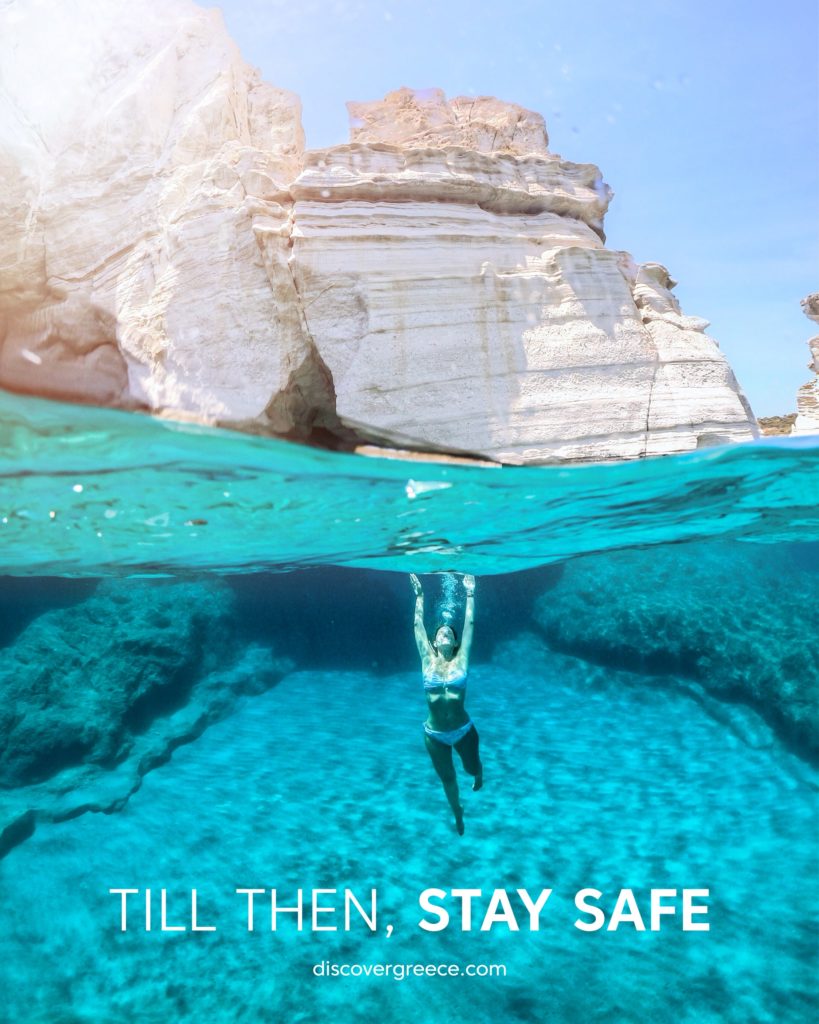 The shoulder season is a great time to visit Thassos if you want to avoid the large summer crowds, but still enjoy good weather conditions and few rainy days. The shoulder season typically runs from April to June and September to mid-October.

During these months, you’ll find that the weather is still warm and sunny, but there are fewer people on the island. This means that you won’t have to deal with traffic jams, long lines or overbooked restaurants.

When on a budget, visiting Thassos during the low season is ideal. Although you won’t enjoy the same weather conditions as you would during summer, you’ll find that hotel prices are significantly lower.

The low season is from November to March. During these months, the weather is cooler and wetter. However, this is also when you’ll find the best hotel deals on the island. People don’t typically visit Thassos during the low season because of the weather conditions.

If you don’t mind a little rain and cooler temperatures, then visiting Thassos during the low season is a great way to save money on your holiday. Just be sure to pack some warm clothes and an umbrella,

The month of April and May is the spring season in Thassos. The weather is starting to warm up, and flora is in full bloom. This is the best time to visit Thassos since the island is not too crowded, and you can still enjoy good weather conditions.

The weather in Thassos during spring is mild with some occasional showers. Despite the rare rainfall, it doesn’t ruin the fun since, unlike other parts of Greece, the showers in Thassos are brief and quickly followed by sunny skies.

The average amount of rainfall in spring is around 11 days, which means that you’ll likely experience at least one day of rain during your visit. However, this amount is significantly lower than other months such as November where the rainfall is almost double.

Why is it great to visit in Spring

There are quite a number of reasons why Thassos is great to visit during spring. First of all, the weather is mild and pleasant. This means that you can enjoy exploring the island without feeling too hot or cold.

Another reason is that the spring season is not as crowded as summer. This means that you won’t have to deal with hotels being overbooked and traffic jams. Lastly, the prices for hotels and other tourist activities are slightly lower during spring since it’s considered to be the shoulder season. 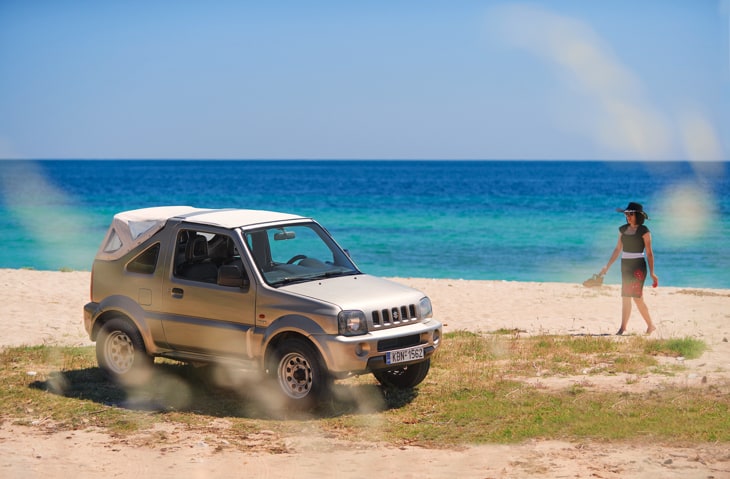 Tips when visiting in Spring

Here are some tips to keep in mind when visiting Thassos during spring:

Summer (June-August) is the peak season in Thassos, and this is when the island is the most busiest. If you enjoy the Cretan sun, you’ll love the weather conditions on Thassos.

The island is also quite humid during summer, so you can expect to sweat quite a bit when exploring Thassos. Despite the heat, it’s still a great time to visit since the sun shines almost everyday.

Summer is hot and sunny, with only a few showers. In July and August, maximum temperatures typically hover around 28 °C (82 °F), but there are hotter times when temps reach 34/36 °C (93/97 °F). Fortunately, there are sea breezes that help to keep things cooler in the coast.

As mentioned earlier, Thassos has a Mediterranean climate, which means that it’s quite hot and sunny during summer. The sun shines throughout the day, and there’s only a small chance of rain.

If you’re visiting Thassos during summer, be sure to pack some sunscreen and sunglasses. You’ll also want to drink plenty of water to stay hydrated.

Why is it great to visit in Summer

Summer is the best time to visit for people who don’t mind the scorching heat. The weather is perfect for swimming, sunbathing, and even snorkelling since the waters are quite clear.

If you’re looking to explore the island, summer is also a great time since most of the tourist attractions are open. Also parties and nightlife are in full swing, so you can enjoy the lively atmosphere well into the night.

Tips when visiting in Summer

Here are some tips to keep in mind when visiting Thassos during summer:

The months of September, October and November are the Autumn or Fall season in Thassos. This is the time when the island starts to quiet down as tourism starts to die down.

Autumn is a beautiful time to visit Thassos since the leaves on the trees start to change color. This creates a stunning contrast against the backdrop of the sea. Taking a walk through the forests during this time is a must-do activity

You can expect the temperatures to be mild during autumn, with an average of 23 °C (73 °F) in September. In October, it drops down to 16°C and 11°C in November,

Autumn, which lasts from September to November, begins mildly or pleasantly warm and slowly cools. The rains become more frequent over time, but there are still weeks without downpours in September. The first days of November, and sometimes even October, are a little chilly and windy. 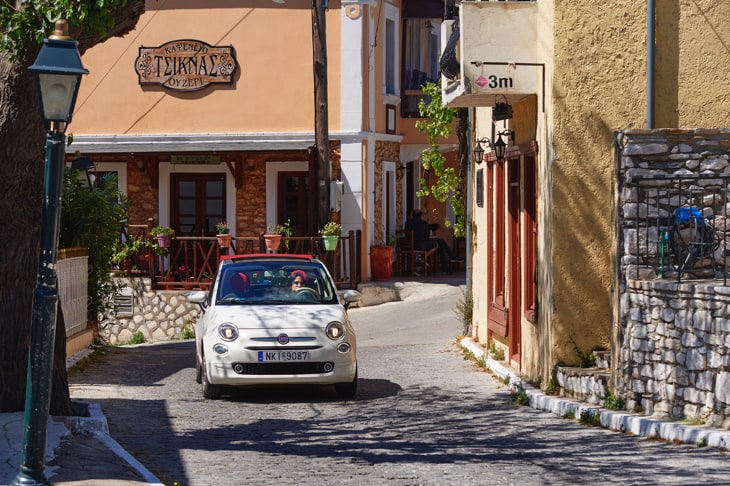 Why is it great to visit in Autumn

Despite the slightly cooler weather, Autumn is still a great time to visit Thassos. The island is much quieter since most of the tourists have left, Also, the prices for accommodation and food are cheaper in Autumn.

Taking pictures during Autumn is also a great idea since the colours of the trees make for a beautiful contrast against the Aegean sea.

Tips when visiting in Autumn

Here are some tips to keep in mind when visiting Thassos during autumn:

The winter season in Thassos lasts from December to mid-Match. This is the coldest time of year and sometimes, snowfall can occur.

Although it’s quite cold, the island is still beautiful during winter. The trees are covered in snow and the scenery is quite breathtaking. Holiday vibes also start to fill the air as Christmas approaches.

Winter, from December to mid-March, is bitterly cold: maximum temperatures usually hover around 8/9 °C (46/48 °F), but they can drop below 5 °C (41 °F) at times, and the wind can add to the chill. Furthermore, it may snow from time to time, and temperatures may remain below freezing even during the day during the most intense cold waves.

You can expect the weather to be cold and sometimes, snowy. The sun doesn’t shine as much and there are more days with rainfall.

Why is it great to visit in Winter

You may think that there’s not much to do in Thassos during winter, but that’s not true. There are plenty of activities to keep you busy. For example, checking out museums, going to souvenir shops or trying out the local food. Winter is also a great time to get discounts on accommodation and food since many businesses are closed during this time

Tips when visiting in Winter

Here are some tips to keep in mind when visiting Thassos during winter: